Thought For The Day As the twig is bent, so shall the tree grow - good association, good growth LIC Samir Kotak

Indian life insurance companies are set to hike premiums for their term plans after several reinsurers increased rates for underwriting portfolios of these pure-protection covers. The move comes even as the domestic life companies face higher-than-expected mortality claims due to Covid.

Reinsurance rates for Indian life companies had been hardening before the pandemic. Global underwriters, led by the US-based RGA, turned wary in the wake of lower rates in the Indian market, which some said were cheaper than the cost of a life cover in European countries with better life expectancy rates. Given that this hike has come during a pandemic, insurers do not have the headroom to absorb the higher costs. Domestic reinsurer GIC Re is also understood to have raised rates on some contracts.
Some reinsurers changed rates at the start of this fiscal year. While others, who may not have fully reflected the hike then, are seeking to change rates now. We believe the current increases are only a catch-up with market rates. In line with our reinsurance arrangements, we reflected the rates in the new product we launched in July 2020. 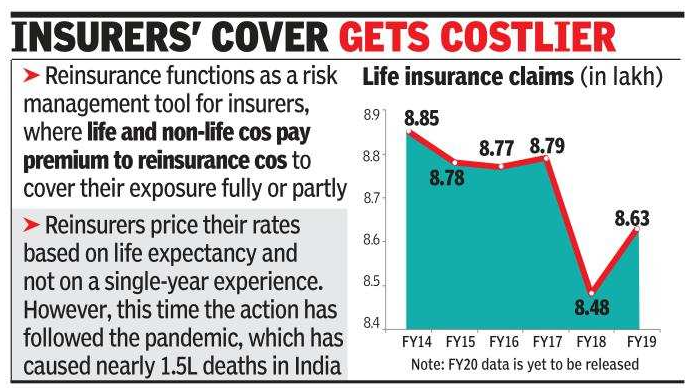 According to insurance distributors, some companies have indicated that rates will go up from April 2021, when the new reinsurance contracts come into force. The companies that are understood to be revising their rates include Max Life Insurance, Tata AIA Life Insurance, IndiaFirst Life and Aegon Life.

Reinsurers price their rates based on life expectancy — which is a long-term trend — and not on a single-year experience. However, this time the concerted action has coincided with the pandemic, which has caused nearly 1.5 lakh deaths in India.

The industry is seeing a worsening of mortality claims among policyholders due to Covid. The actual claims paid is turning out to be higher than what was estimated by actuaries at the time of pricing the policies. We have received 630 death claims for Rs 41 crore arising out of Covid. These included 291 from individual policies and 324 claims from group policies.

Rinsurance cover is provided by multinationals in some cases and they are outside the purview of the insurance regulator. If domestic insurers do not increase their rates in line with what is quoted by reinsurers, they will end up bearing the risks on their books.

Insurance distributors say that there has been a secular trend of improvement in life expectancy in India. As a result the term insurance rates have fallen dramatically over the last decade.Even after the rate increases, the cost of life insurance will be cheaper than it was 10 years ago.

Over the last two years, reinsurers turned wary of the decline in rates. Insurers have been bringing down rates for high-value policies because policyholders in that income segment had better life expectancy because of frequent medical tests and treatment.